Having set my sight on doing a photo walk of all the Yamanote Line station, I faced a slight problem. Some stations, such as Uguisudani have a very limited interest. Others, those big stations that everyone knows, those monsters of complexitiy, represent either several cities joined in one place (Tokyo station for example, should I present Otemachi, Yaesu, Marunouchi?) so have complex history or would deserve several articles just to do them justice (Ueno). So I just decided to stop worrying and start with Ikebukuro.

With more than 910 millions users per year, it’s the third most active station in the world. It’s also THE station connecting Tokyo to Saitama, the prefecture at the north of Tokyo with quite a seedy reputation.

While preparing my hike though, I didn’t really find anything interesting to see or shoot. Some recommended restaurants (some would say the best French crepes restaurant in all Tokyo, quite a feat for a French guy) and shopping, with the Ikebukuro Sunshine City. Nothing thrilling for me.

And then I went.

I wasn’t the first time I set foot in Ikebukuro but going there without a goal, just to keep the eyes open, it changed the idea I had of the area.

And it was the very first place in Tokyo where I felt the weight of the concrete structures. Almost in an organic way. A forest of concrete. Even more than Shinjuku where neons are king.

Towers reaching out to the sun, using the older structure as their way up, crushing them under their presence.

Fallen structures, worn down by the years, with new structures ready to take their place. 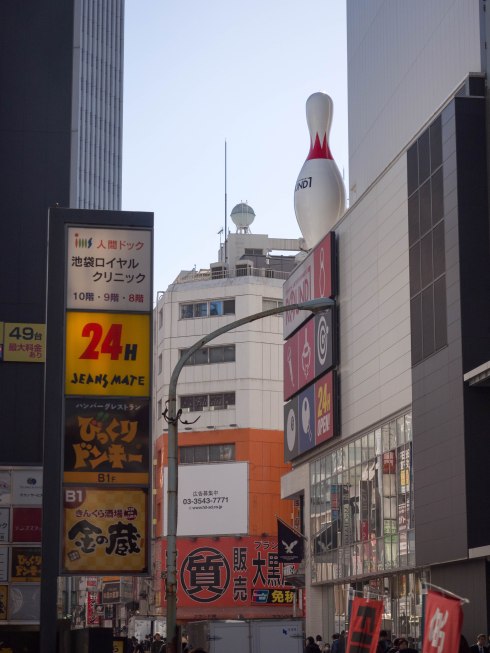 And stairs and ducts as vines.

And in the middle of this metaphorical forest, the Ikebukuro Mori. Some kind of shitty city park. Shelter for stray cats. A vegetal forest stuck between love hotels, train tracks and a garbage treatment plan.