I first thought I was going to see some January Sumo matches but without having booked tickets, it was a no go. I could have waited in the cold in the early morning in the hope of getting one, but I preferred to sleep in and later go for a walk between Ueno and Ryogoku. Minowa and Yoshiwara more precisely.

Minowa: the heart of Tokyo Shitamachis

Historically, Minowa is known to be a ghetto. An area where parias where forced to live, toiling in small jobs, especially after WWII. There are still many of the small workshops and small dispatch company from that time remaining in the area. That and Goodwill associations for homeless persons.

It’s also the area of Tokyo where Ashita no Joe takes place and there’s even a shopping street dedicated to the character. A very tired and dilapidated shopping street. The rare sun rays entering the street rather come from parking lots than from what used to be a transparent ceiling. Those parking lots are reminders of the shops that used to stand there before time and fate changed. The current state is quite different from the heydays of the 70s. 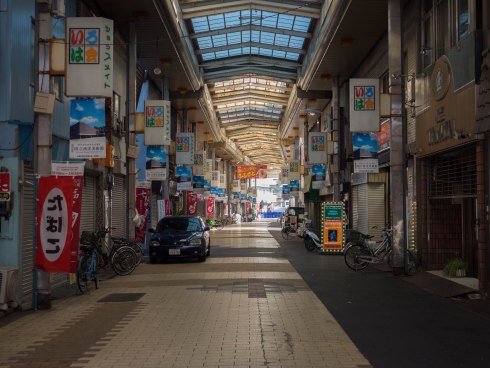 Crossing the street from there, you arrive almost immediately into what remains of Yoshiwara. I always wanted to set foot there, finding out what was the historical Kabukicho mais never took the time until now.

It’s still a red-light district now but we are far from the stereotypical image of Yoshiwara with its wooden houses and oirans waiting behind the grids for a customer. Yoshiwara is now a random neighbourhood, with random concrete building. And bouncers trying to get you IN the building. And big black cars with someone always making sure there are sparkling clean. And water. Everywhere. Another reason as for why prostitution is 水商売 in Japanese ?

This neighbourhood has its fair share of sad stories. In addition to the human trafficking who took (takes?) place there, Fire destroyed the area several times: in 1855 during the great Ansei earthquake, in 1923 during the great Kanto earthquake and then during the fire bombing of Tokyo during WWII. No wonder there’s nothing left of the historical area except for the square street pattern.

During the two biggest fires, casualties were high. Given the area reputation, its development was never given priority. And due to that, there was no bridge to cross the Sumida River from that side of Asakusa, turning the whole area into a trap. During the 1855 earthquake and fire, people found refuge in a Benzaiten temple built around a pond but it was too small and 490 people, mostly women working in Yoshiwara did there.

The temple is still there, even though the ponds were filled with the exception of an extremely small fish pond but their memory is preserved. Most strikingly through particularly crude pictures taken on the scene at the time.

That was my first planned photo walk in a shitamachi area. Interesting but also heavy. Both from the history of the place but also because this is still a place where people live (in contrast with tourist places). As a personal policy, I donc want to take pictures of people in private settings which limits what I show here. Even more so when said private life is not simple to start with.

Other of these photowalk will come. Maybe the next one on the children of Ueno ?